One of the most novel aspects of Disney Vacation Club membership involves Disney’s dedication to plussing.  Walt Disney committed his business toward always improving the theme parks, a concept that remains in action to this day.  While the idea sounds great in theory and undeniably works well in execution, it does lead to some strange circumstances at times. To wit, one DVC resort has undergone massive renovations twice in the past decade. I was there both times, and it was weird. So, we’ll do something a bit different this time. I’m going to review a resort I just left last week! Here’s a DVC resort review of Disney’s Polynesian Villas & Bungalows, a property undergoing significant refurbishment. When we discuss the Polynesian, we’re talking about a place that has literally been at Walt Disney World since the beginning. As such, its logistics are world-class. You can look at parts of Magic Kingdom from the beaches at the Polynesian. In fact, one Room Type guarantees a view of parts of the park.  Due to the proximity, the Polynesian can take you to and from Magic Kingdom in a matter of minutes.

Ordinarily, you’d take the monorail, but Disney has demolished the old station to build something more forward-thinking and stylish. Right now, you’ll rely more on the boat system to take you to the park. However, Polynesian fans know that three of the buildings – Tokelau, Pago Pago, and Moorea, reside near the Transportation and Ticket Center (TTC). So, you also have the option to walk there and ride a monorail directly to Magic Kingdom.

I’d usually mention that the other part of the TTC will transport you to EPCOT’s front gate.  Alas, that line isn’t in operation currently due to the pandemic. I definitely felt its absence during my visit last week.  In short, the Polynesian’s logistics are among the best at Walt Disney World as a rule, but they’re not what we’re accustomed to having right now. Theming at the Polynesian

You don’t even need to have heard about the theming at the Polynesian to intuit it the first time you walk on the campus. This resort transports guests to the South Seas. It’s an exotic island getaway that will cause you to forget that you’re at Walt Disney World. The Pacific island vibe will mesmerize you with its beauty, relaxing you so much that you may forget about your Advanced Dining Reservations.  That…might have happened to me once or twice.  In fact, I recently spent two hours just sitting on my hotel room deck and appreciating the beauty of rain falling on trees outside.

The theming here rivals anything Disney has ever done, which makes sense. Imagineers have had roughly 50 years to perfect the Polynesian. I’d go into greater detail about the theming, but that topic naturally blends itself into… Let’s stretch out the definition of “lobby” for this conversation. At the Polynesian, the “lobby” is really the entire Great Ceremonial House. This central building exemplifies the sense of community, the proverbial ‘ohana that filters through all Samoan/Fijian culture. It’s the homiest place in Orlando.

When you enter the building, the smell will instantly transport you to the South Seas, as an intoxicating aroma wafts throughout the lobby. People love this fragrance so much that you can buy Disney candles and wax tarts that recreate it. I know because I’ve spent hundreds of dollars on them! You’ll also find three restaurants, a bar, and two (arguably three) shops at the Great Ceremonial House. Then, another food stand serves a Disney delicacy.

The Great Ceremonial House provides so many amenities in a single location that you can hole up at the Polynesian for a week and never need to go anywhere else. Now, you’re at Disney and will go to the parks. But that option exists. We’ve spent several hotel days at the Polynesian and never felt the need to leave the campus.  The Polynesian lobby is my favorite among all DVC lobbies, which is a tough list to top! 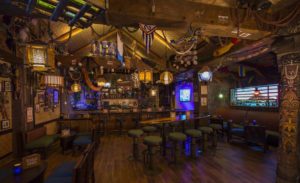 Restaurants and Shops at DVC’s Polynesian

I could write an entire article about this section alone. So, I’ll try to be brief, but the TL:DR is that you can eat, drink, and shop to your heart’s content here! The most recognizable restaurant at the Polynesian is ‘Ohana, an All-You-Care-To-Enjoy dining experience that involves wave after wave of food. Servers bring you sausage, bacon, and Mickey Waffles for breakfast or noodles, chicken wings, shrimp, and bread pudding for dinner. I’m not even covering everything since the dinner menu changes at times. The point is that you eat well at ‘Ohana, and you get to meet Lilo & Stitch at breakfast!

Of course, I’m just as big a fan of the restaurant across the room, Kona Café. It’s one of the hidden gems at Walt Disney World, and it’s rarely full. Both restaurants also serve a bread dish that is the tastiest in Orlando, which leads me to the fact that another place does, too.

You can catch dinner and a show (with fire dancing!) at Spirit of Aloha, a performance I regularly enjoy.  Much of the food comes from ‘Ohana and Kona Café, including the bread! Alas, this brings me to some sad news. ‘Ohana and Spirit of Aloha aren’t available during the pandemic, and Kona Café offers only a limited menu. That’s okay, though! We rebooted and ate three times at Capt. Cook’s, the Quick Service eatery just past the lobby! I believe it offers some of the best value on the Disney campus, and it serves the hotel’s world-famous Tonga Toast for breakfast, too!

Speaking of places I love that are closed at the moment, Trader Sam’s Grog Grotto is the go-to bar for glow drinks! I missed it so this trip. Also, Polynesian fans know that Pineapple Lanai resides just past the hotel lobby. Dole Whips are on the menu here, saving you a trip to the park! As for the stores, there are two main ones, both of which reside in the Great Ceremonial House. BouTiki on the first floor sells Polynesian candy and clothes and plenty of other terrific island gifts. And I can honestly say that I’m wearing one of its shirts today! Moana Mercantile is half a souvenir shop and half a general store. You can load up on food and snacks on one side. Then, if you’re anything like my wife, you can buy every Stitch toy in existence on the other. Kids loooove Moana Mercantile!

Seriously, the amenities at the Great Ceremonial House marry form and function seamlessly. To wit… I could list several options here, as the Polynesian overflows with unique amenities.  However, I think you can already tell what I’m about to say. The Great Ceremonial House provides inimitable hospitality from a single location.

Until 2020, guests could interact with the legendary Auntie Kau’i, the Pearl Harbor survivor, who left her home to join the Polynesian for its opening. The dancer became a permanent fixture in the lobby. She handed out leis to guests and sold other floral decorations.  Even in her absence, the Great Ceremonial House has continued this tradition. Disney has temporarily switched hotel check-in to Pago Pago while work continues on the main building.  I was surprised and delighted to receive a lei when I checked in this time, as I hadn’t expected one.  Disney packages them to maintain safety, but this lovely touch has withstood even a pandemic!

So, the x-factor at the Polynesian is more than just a place, the Great Ceremonial House. It’s the spirit of aloha that flows across the campus. More than any other DVC resort, this place feels like home to me. Unlike most DVC resorts, the room options at the Polynesian seem relatively limited.  You can book a studio, a studio with Lake View, or you can max out by snagging a Bungalow. For most people, the studio is plenty enough. In fact, I believe it’s the best studio of any DVC resort.  Part of that stems from the fact that I’m a tall man, and I adore the 465 square feet of space. Also, the studio includes two bathrooms…sort of. Only one of them comes with a toilet, but there’s a shower/bathtub in that room. The middle space in the room comes with a giant sink space to get ready in the mornings, giving couples their own separate rooms.  If you’re anything like me, you’ll barely notice, though. Your eyes will be on the rainfall shower beside it. Thirty-minute showers are a real thing at the Polynesian. Couples should target a studio here for this reason, among many others. As for the Lake View, it’ll include a theoretical look at Magic Kingdom. Some rooms are better for it than others, just like at Bay Lake Tower.  However, you should be aware that some guests complain about the noise from the Electric Water Pageant. It’s a small but vocal minority.  Just keep it in mind if you’re a light sleeper. As for the Bungalows, they’re Heaven on Earth. It’s a two-bedroom suite in the middle of the water, and you’re staring straight at Cinderella Castle. Even better, there’s a hot tub built into the exterior deck. You can bathe in it while looking at Magic Kingdom! These rooms cost mega DVC points, but if you can afford a Bungalow, you should treat yourself! You’ll never regret it! 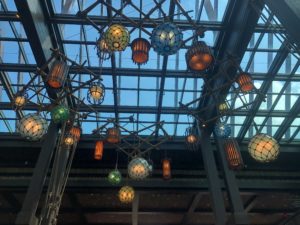 I think you can tell from my comments that the Polynesian is my favorite DVC resort.  In all seriousness, there are only two other hotels on the planet that can match it for me, and I have to say one of those since I spent a honeymoon there.  I’m never happier than when I stay at the Polynesian to the point that I’m already fantasizing about my next trip…and I just got back 10 days ago! Still, the current construction at the Polynesian did adjust our trip some. I should emphasize that it’s temporary. Disney hopes to finish up by the summer. Even so, the lack of a monorail station at the Great Ceremonial House felt a bit jarring. And we really missed ‘Ohana during our trip.  Of course, we promptly forgot about these minor aggravations. We adopted, just like we did in 2015 when the place was a construction mess.

At the end of the day, it’s still the Polynesian, and nothing beats that! Any hotel stay here is always an A+!