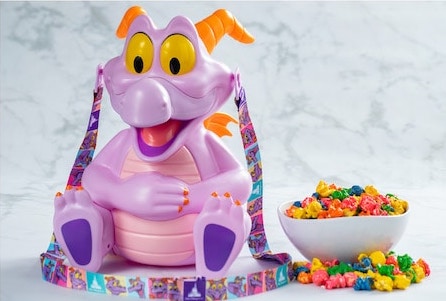 Posted at 11:56h in Uncategorized by Katie Fissore 0 Comments
0 Likes

The longest wait at Walt Disney’s Epcot this month was surprisingly not for an attraction or dinner reservation it was for a…POPCORN BUCKET. Yes, Disney fans have stood in line as long as seven hours for a Figment Popcorn Bucket at Pop Eats! in Epcot for the hard to get, hot ticket item. Seven hours! You could watch all four Toy Story movies in that time and still have thirty minutes left to Instagram about it.

Pop Eats! which was THE destination to buy The Premium Figment Popcorn Bucket is officially sold out, and since the festival just started, Disney is hopefully ordering more. But, Figment fans can’t hold out for a maybe, and the number one souvenir has left Epcot and is now one of the most searched items to bid on, on EBAY. The once $25 bucket is being bid on for as low at $80 and the highest I’ve seen it so far is $279 (And as I’m looking on EBay now, none of the popcorn bucket’s even come with popcorn. How rude!)

Some of you may be asking…. so what’s the deal with this bucket? Does it come with annual passes or three wishes from Genie?

However it is cool and a throwback to the history of Epcot. The bucket is in the shape of the friendly purple dragon and is filled with pre sealed rainbow popcorn and a Figment sticker. The popcorn bucket straps feature a Figment face pattern which can later be used as a lanyard.

This year being the 50th Anniversary, Disney is giving shout outs to the staples that have helped keep the magic growing and alive; Figment is definitely one of them.

Figment first debuted in 1983 in the Journey Into Imagination ride at Epcot. Epcot’s gate opened on 1982, making Figment an instant Epcot favorite, from the very beginning. On the Journey into Imagination ride, Disney guests were introduced to Dreamfinder and Figment- a dynamic duo. Dreamfinder shows Figment how nothing is impossible with your imagination. This version ran until 1998. Disney then created Journey Into YOUR Imagination which ran from 1999 to 2001. It was the shortest version of this attraction, and became known to the Imagineers that it was NOT a fan favorite. The dislike for this variation probably had something to do with that Figment went from being a star of the first attraction to just small cameos. Disney fans waited seven hours for a bucket in the shape of this little guy,-they want more than just a five second cameo.

The latest in the Journey into Imagination series, is the one that is still at Epcot today. In 2002, the attraction was re-imagined and Figment booked a much bigger role, while Dreamfinder (the original) got the boot, and was replaced with Dr.Nigel Channing.
The voice that brings Figment’s magic and positivity to life is Dave Goelz, who also voices The Muppet’s Gonzo the Great. Figment has helped spark Disney magic and imaginations for over 40 years now and perhaps that is why the Premium Popcorn Bucket is in such high demand, because it represents everything that we love about The Walt Disney Company.