Top 5 Restaurants Among the DVC Resorts Posted at 17:55h in Dining by David Mumpower 0 Comments
0 Likes

Disney Vacation Club members eventually eat everywhere that Disney serves food. Since memberships last for decades, we visit all the resorts and then dine at their restaurants.

These tourist meccas trigger debates about the best places to eat, and no answer is wrong…except maybe ESPN Club. We sure do love to talk up our favorites, too.
Everyone has a restaurant that completes their DVC vacation, making it a family tradition. So, no list is wrong as long as it comes from the heart.
Today, to stir some conversation, I’ll discuss the top five restaurants among the DVC resorts. And it’s totally fine if you disagree! Feel free to add your own list in the comments!

The Contenders
Exercises like this list come with inherent challenges. I mean, deciding the best restaurant in Disney’s Animal Kingdom is challenging enough. When we factor in the options at Kidani Village and Jambo House, it’s an insanely deep and strong batch of restaurants. Sanaa and Jiko – The Cooking Place both deserve consideration. Similarly, I could create a high-quality list by choosing Disney’s BoardWalk Resort restaurants exclusively. None of these places is technically inside the hotel, but that’s semantics. They’re all terrific and only minutes away from your DVC room.

Across the water, Disney’s Beach Club Inn features Beaches & Cream and Cape May Café. Both merit a spot on the shortlist, and I could pick nothing but monorail resort restaurants, too. I mean, Chef Mickey’s and California Grill bring happiness and joy, while ‘Ohana and Kona Café deliver impeccable flavors. Then, there’s decadent dining at Disney’s Grand Floridian Resort & Spa. I feel like Victoria & Albert’s inclusion would be cheating, but Narcoossee’s and Citricos are worth a vote.

You can already tell how difficult this exercise is. I haven’t even mentioned Grand Floridian Café or 1900 Park Fare! All the restaurants I’ve mentioned here received a long look but didn’t quite earn a nomination.

Other places like Disney’s Hilton Head Island restaurants didn’t get a second glance, though. That resort features only fringe dining options, as Disney expects you to dine in town instead. It is what it is.

Keeping these brutal cuts in mind, here are the five restaurants representing the finest in DVC resort dining. 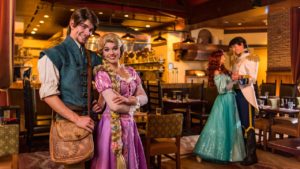 Trattoria al Forno
I feel strongly that one restaurant on this list should include a character meal. I’m sticking by that even during a pandemic when Disney’s not
running many of them.

Character meals embody the joy of a Disney vacation, as you get to eat a terrific meal between occasional interruptions. Those distractions come from beloved Disney characters like Mickey and Minnie Mouse. Goofy’s my favorite, as the costumed cast members in these outfits always possess a tremendous sense of humor and kinetic energy.

DVC fans have discovered another star over the past couple of years, as Grumpy delights at Storybook Dining at Artist Point. However, I prefer Italian food to poisoned apples. I’ve heard bad things about the latter.

So, my first selection is Trattoria al Forno, home of the Bon Voyage Breakfast featuring characters from Tangled and The Little Mermaid. Practice your Smolder before you visit here, as Rapunzel and Flynn will want you to show your stuff. It’s a dynamic way to start the day. Plus, once you’re finished, you can enter EPCOT via the International Gateway or take the Disney Skyliner to Disney’s Hollywood Studios! The Bon Voyage Breakfast isn’t available due to the current moratorium on character meals, but it’ll come back soon! The Wave… of American Flavors (the blue room)
Technically, there aren’t any Bay Lake Tower Table Service restaurants. You’ll find a pool bar, but that’s about it. However, you CAN eat very well by crossing the bridge into Disney’s Contemporary Resort. I love all the options here, including Contempo Café, where I recently purchased (and devoured) a couple of decadent cupcakes.

While I have a soft spot in my heart for California Grill, the place where I celebrated my tenth anniversary, I find the food here too pricey for the meal quality. I apologize if that’s blasphemy to you. In fact, I came closer to selecting Chef Mickey’s, a place that features the most melodious sound of all, the laughter of children. Alas, the food isn’t very good, which is a dealbreaker for the best restaurants list. Instead, I selected a DVC staple on the bottom floor of the Contemporary. Yes, I’m talking about The Wave… of American Flavors.

The cuisine here will satisfy even the most challenging palates, and the setting combines style and class with familiarity. Some DVC members prefer dining in the Blue Room, which makes the meal feel…bluer. It’s trippy fun and a memorable dining experience. Also, one of the dirty secrets about The Wave is that it sells some of the same foods from California Grill, only at a fraction of the price! So, this place provides fantastic value, too! Boma Flavors of Africa
Picking the top Disney’s Animal Kingdom Lodge resort restaurant comes with a unique problem. The campus features two different resorts! I already mentioned two places that didn’t quite make the cut, and I strongly considered The Mara as well. For my money, nothing tops Boma, though. This restaurant may not feature the view or the bread service at Sanaa or the wine list at Jiko.

What Boma does offer is exquisite African cuisine the likes of which you won’t find anywhere else in Orlando. The savory stews at this All-You-Care-to-Enjoy restaurant will dazzle your palate and open your eyes to a new world of flavors. Bobotie stands out as the signature dish here, but dessert fans would vote for something else. Boma’s Zebra Domes would receive plenty of votes as the best DVC resort restaurant dish overall. Animal Kingdom Lodge started selling them at other locales due to overwhelming demand for these chocolate treats. I’ve literally taken a bus to this resort for a Zebra Dome, which tells the whole story about the appeal of Boma.

‘Ama‘Ama
The first time you visit Hawaii as a DVC member, you’ll be blown away. When Disney constructed Aulani, A Disney Resort & Spa, it planned the ultimate vacation destination. You can swim and sunbathe between your island adventures, all of which are unforgettable. For instance, I highly recommend the tour of Pearl Harbor. Helicopter rides display Hawaii’s beauty as well. Also, the Aulani resort restaurants are mind-boggling.

Food is engrained in the Pacific lifestyle, and you’ll discover some of the best sweet and savory dishes in the world here. You must dine at Makahiki – The Bounty of The Islands at least once on your trip. However, there’s another place that somehow surpasses it.

‘Ama’Ama embraces contemporary island cuisine, the kind that allowed Sheldon Simeon to advance deep into Top Chef competitions twice. You can order ginormous platters of lobster or crab legs. All the while, you can look out at the lush surroundings thanks to floor-to-ceiling windows overlooking the ocean. ‘Ama’Ama is magical, even by Disney standards. Olivia’s Cafe
I understand that Olivia’s will never win TripAdvisor awards or earn a Michelin Star for its cuisine. Society’s too snooty for that. For DVC fans, Olivia’s Café represents something more, though.

Since the earliest days of the Disney Vacation Club Resort in 1991, this place has signified the program’s family nature. When members stay at Disney’s Old Key West Resort – and let’s be honest that everyone does at some point – they inevitably eat at Olivia’s. The restaurant has spent the last 30 years as a staple of DVC dining, the linchpin experience that unites us.

Virtually all longtime members have sampled some Southernmost Buttermilk Chicken and/or Conch Fritters over the years. And we’ve adored the comfort food. Over the years, Disney doubled down on the premise of multigenerational familiarity by taking member photos and placing them on the walls. So, each visit to Olivia’s comes with mementos from the past. Olivia’s represents stability, a reminder that DVC will always be there for its members. It was the first DVC restaurant and deserves recognition as the best.